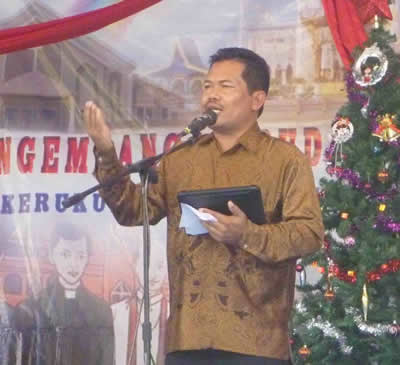 Christ for the Island World provides supplementary support for twenty-seven pastors to develop new communities of believers in remote areas of Indonesia. The goal is to produce spiritually and financially stable churches where there was little or no gospel witness.

We provide substantial support for ten evangelists. These individuals have employment in education, business or local government but our funding enables them to carry out substantial evangelism efforts. Most of them pastor churches of recent converts resulting from their evangelistic efforts. With their spouses, many also operate preschools where they can share the love of Christ.

We support Field Director David Aryana (see About Us for more about David) and two regional coordinators who provide direction, encouragement, and counseling to the pastors and evangelists. They also recommend new workers and locations for new ministries. Here you see David preaching to students, most of whom were Hindus.

The NTT Region of Indonesia is where our Outpost Pastors live and serve. Currently, CFTIW provides support for twenty-seven pastors on four islands – West Timor, Sumba, Rote, and Sabu. They serve villages of a few hundred people in remote areas.

Chuck has a close relationship with each of these pastors. He ministers to them as their pastor, meeting their spiritual needs and, in many cases, their material needs (sometimes out of his own pocket). Please pray for Chuck as he serves a vital role in this area of Indonesia.

Heber and his wife Johanna have been supported by CFTIW for over twenty-five years. They have used our prayer and financial support to begin over twenty new churches, essentially from new converts! It is difficult to describe how miraculous this is, particularly in an area that is predominantly M. Truly the Lord has blessed their ministry in an unusual way! Please pray that the Lord would give them health and strength to continue this ministry.

Lius Ga has been supported by CFTIW for several years. For the last few years, he has taken on the critical role of Living Water Project Lead. In this capacity, he is the "General Contractor" for our Living Water (clean water) Projects. He coordinates the workers on the projects and as you see in the picture, he leads by example!

Uking has been working for eight years in West Kalimantan among Kaharingan (Kalimantanese animist) people and M people as an evangelist. During that time, 140 families have received Jesus as their personal Savior! He has been a mentor to the churches that have been formed by those new believers. In addition, one of the churches has established three outpost churches! Uking has also built two church buildings for the new believers. In the past two years he has started four home churches, two of which he is leading while a co-worker is leading the other two. This year 15 families came to the Lord and he baptized 10 people, one of whom is M background! His great desire for next year is to find and train local leaders to disciple the new believers so that he can concentrate on evangelism!

To supplement the support they receive from CFTIW, Uking and his wife Widya have started a small business selling fried banana, wet coat and water filters (quite a combination!). They also raise chickens and grow vegetables.

We praise the Lord for how he is using Uking and Widya for His Glory! We are thankful to have a part in their ministry!

CFTIW began supporting Yahya (Indonesian for "John") in late 2014. He pastors a church in Lewa Village, East Sumba, where he started a pre-school and elementary school with over eighty children registered. Many from this animist village have come to faith in Christ, including children from the school and their parents! In 2014, CFTIW completed a Living Water Project that provides clean water to the school. In 2015, CFTIW installed a water turbine that provides electricity to the village! Go to the Living Water Projects page for additional related pictures.

Jon serves in West Papua, which is the western half of the island of Papua that is in Indonesia. (The eastern half is the country of Papua New Guinea.) One of my favorite missions books is “From Jerusalem to Irian Jaya”. The title equates Irian Jaya to the uttermost (KJV) or remotest (NIV) parts of the earth (Acts 1:8). Irian Jaya is the former name for West Papua! Unlike the arid regions where most of our workers serve, West Papua is characterized by mountains, jungle, and rivers. CFTIW recently funded the construction of a boat large enough to transport John and other Christian workers whom John has trained to evangelize the Auye people and other surrounding tribes who live far up river. He also has launched a children’s ministry in a slum area in the city of Nabire. In addition, John is sponsoring one of his disciples to attend Bible College in Bali. In the picture below, John is on the left and our Indonesian Field Director David Aryana is on the right. Please pray for John as he ministers to those in the remotest parts of the earth!

Andy joined the CFTIW Team in 2016. While in Bible College, he led eight families to Christ! He assisted in building the Living Water Project in Karuka. He will be serving as an evangelist there. Pray that the Lord would use Andy to bring Living Water to many more Indonesians in the Karuka Village Area.

Andre and Katrin, our supported evangelist couple in East Sumba have now settled into their new house in Kemalapia Village. They’ve already started a pre-school, with 16 kids initially enrolled. They’ll meet in the new church that was recently built and dedicated in the village. When they learned that many of the adults in the village could not read the Bibles they had been given, they committed to teach all who were interested how to read and write. Classes have already begun in the evening under lights powered by the hydro turbine CFTIW installed last year as part of the Living Water project.

Andre, who has expertise in modern farming techniques, is working with the villagers to grow dry-land rice, which is suitable for the area. And later this summer, he and Imanuel Santoso will build an aquaponic fish farm and seed bed, again using the water from the Living Water project.

In the meantime, the church in Kemalapia continues to grow. Future plans also call for Andre and Katrin to become mentors for Compassion International, perhaps establishing Kemalapia as an approved meeting place for local teenagers.

Bernadus is our supported evangelist on Raijua Island. He teaches English and Math to elementary school children along with his other evangelistic efforts. The island’s three villages are widely scattered, so in June CFTIW provided funds for a used motorbike. Bernadus reports that there are two new believers and a M-background woman who is under conviction. He asks for our prayers for these three and for his ministry.